Psychology of the Great Collapse

A unified nation can weather an economic downturn without crumbling, however highly polarized societies are much more likely to fall apart when facing such pressures. The fact that the United States — which currently controls the most powerful currency in the world — is fracturing internally, has global implications.

It’s been said that every nation is three meals away from a revolution. This proverb oversimplifies things somewhat. Sociologist James C. Davies proposed a more nuanced hypothesis: sharp declines in living standards after long periods of prosperity prosperity tend to spark upheavals. This means that a revolution is more likely to occur in a wealthy country that is suddenly thrown into poverty than in a poor country that consistently suffers even worse conditions. This is due to the perceived discrepancy in what people think they should have and what they actually end up with (aka relative deprivation). This dynamic is sometimes referred to as Davies’ J-curve (see visual representation below). 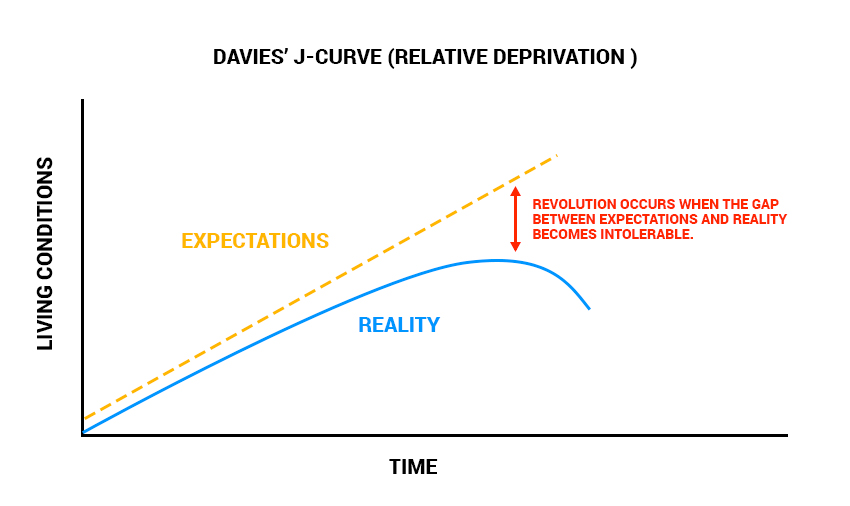 In 2010 Peter Turchin, a researcher at the University of Connecticut,published an article in Nature.com predicting a period of growing instability that would start around the year 2020. Turchin made this prediction based on a computer model built by analyzing anti-government demonstrations between 1780 and 2010. This model factored in economic patterns, including declining wages, wealth inequality, exploding national debt, as well as social pressures (such as political polarization). Using this same model, Turchin currently predicts that the United States is headed for towards a second civil war.

In 2018 a Rasmussen poll found that 31% of the U.S. population believed that a civil war was likely in the near future. In October of 2019 a poll conducted by Georgetown University found that 70% of U.S. voters believed that the country was on the edge of a civil war. The growing perception that open conflict is on the horizon reflects a dramatic increase in political polarization. This polarization is like gasoline waiting for a match. A sharp economic downturn is all it would take to light that match.