As Gazans continue to rain rockets on Israel, a much greater “security issue” exists in the drastic population rise in both Israel and around the world, an American environmental expert warned in Tel Aviv this week. 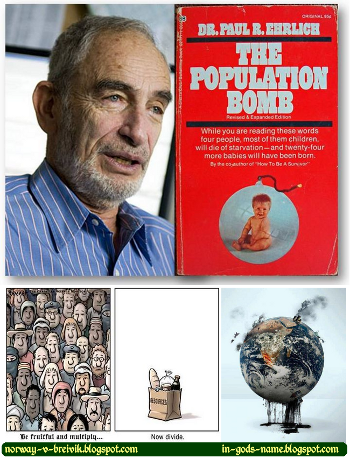 As Gazans continue to rain rockets on Israel, a much greater “security issue” exists in the drastic population rise in both Israel and around the world, an American environmental expert warned in Tel Aviv this week.

“People don’t understand that there are much greater security problems than who you are fighting next door,” said Prof. Paul Ehrlich, Bing Professor of Population Studies at Stanford University’s biological sciences department and president of the school’s Center for Conservation Biology.

Ehrlich was speaking at a seminar on “Population Increase and the Impact on Environmental Resources” on Tuesday night – hosted by Tel Aviv University’s Porter School of Environmental Studies, together with the Israeli Society of Ecology and Environmental Sciences and Ben-Gurion University’s Jacob Blaustein Institutes for Desert Research.

The global population is more than 7 billion, a number that has doubled since the publication of Ehrlich’s book The Population Bomb in 1968, noted Prof. Marcelo Sternberg, of the Israeli Society of Ecology and Environmental Sciences.

Ehrlich argued that while most people are worried about issues such as the debt crisis in the United States – issues that “could be solved with pencil and paper” – politicians are “utterly ignorant of how the world works.

“We just had an election in the US where no single important issue was touched,” he said. “You can’t just tell nature we’re going to blow through 2 or 3 degrees [of temperature rise] and negotiate without you.”

As the population rises both in Israel and around the globe, sprawling urbanization brings continual land degradation and changes in precipitation patterns arise from the greenhouse gases that “we have injected into the atmosphere,” Ehrlich said. Meanwhile, not only is explosive population growth a crisis in and of itself, but the “non-linearity” of the results of said growth are disturbingly problematic, he explained.

“Every person you add of this next 2.5 billion is going to do infinitely more damage than the last 2.5 billion,” he said, stressing that the additional people must move to more marginal lands that require extra development and further transportation of water and other natural resources “We’re already seeing the edges of that disaster,” Ehrlich said.

In Israel, examining the repercussions of population growth involves “juxtaposing two sets of values that many of us hold dearly” – those of Zionist population expansion and those of environmental concerns, according to Dan Rabinowitz, from Tel Aviv University’s sociology and anthropology department.

“When they are brought together they make us feel uneasy and maybe push us toward a debate and toward conclusions that are not easy ones,” Rabinowitz said. “I think that the population policy in Israel and its nemesis – demographic driven Palestinians – are examples of this.”

“Nationalism generally and nationalizing projects of state building in particular might [generate] an inherent tendency to use resources in uncalculated and unsustainable ways,” he said.

Both immigration and pronatalism emanate from the nationalist nature of the Zionist and Palestinian national projects, Rabinowitz said.

More than 11 million people now live in Israel, including inhabitants of the West Bank, and the Gaza Strip, five times the population before the 1948-49 War of Independence, he added. During that same span, the Jewish population jumped from 600,000 to 6 million.

“Zionism was and still is powerfully linked to the modernizing mission of Europe, bringing process to the dormant East if you like – with technological development and a constant growth, exponential growth, in the standard of living serving as a very compelling medium, almost a mantra, a fetish,” Rabinowitz said.

Due to pro-natalism policies, discussion of the dangers of population growth rarely enters the environmental debate in this country, according to Rabinowitz.

Despite the ever-increasing population, Prof. Uri Shamir, of the Israel Institute of Technology- Technion’s civil and environmental engineering department, said that a new master plan of the Water Authority will allow Israelis’ thirst to be quenched for the next several decades.

“Israel can meet the water needs of the increasing population until 2050,” Shamir said. “Many places in the world are facing mounting water challenges, so Israel’s experience is relevant as an indication of what does and will happen, what can and should be done, and what should be avoided, and what some of the responses and solutions might be.”

“The ultimate reason for threats to biodiversity worldwide and in Israel is population growth,” she said.

Some of the effects of the population explosion can be mitigated, however, by policy and lifestyle changes in arenas such as planning, construction, transportation, agriculture, afforestation, pollution control and natural resource management, Dayan said.

“They can actually be managed intelligently if we so choose,” she said. “If our government so chooses there is an opportunity for real action at a national level that can mitigate these effects.”

Lifestyle changes and altering “paradigms in areas of technologies” is also crucial, as is looking upstream in addition to downstream – examining what kinds of waste are being produced, in addition to what to do with that waste afterward, said Sinaia Netanyahu, chief scientist at the Environmental Protection Ministry.

Although Ehrlich said there is a very small chance that world society can avoid collapse due to its booming population, he stressed that it was still worthwhile to try combating the damage that has already occurred.

“My view is 10 percent [chance of salvation], but I think it’s more worthwhile to make it 11 percent,” he said.

“One of the things we do know is that human societies can change in complex ways and extremely rapidly in ways we don’t understand.”