* Natural Homes: 40% of Russia’s food is from Dacha Gardens.

In 2011 the dacha gardens of Russia produced 40% of the nation’s food.

How much land do you need to grow all your food? This is a dacha garden in Russia where there is a strong tradition of growing your own food. 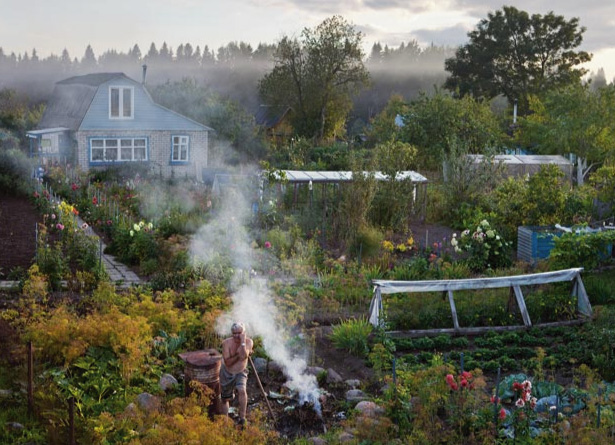 While many in the world are completely dependent on large scale agriculture, the Russian people feed themselves. Their agricultural economy is small scale, predominantly organic and in the capable hands of the nation’s people. Russians have something built into their DNA that creates the desire to grow their own food. It’s a habit that has fed the Russian nation for centuries. It’s not just a hobby but a massive contribution to Russia’s agriculture.

40% of Russia’s Food is from Dacha Gardens

In 2011, 51% of Russia’s food was grown either by dacha communities (40%), like those pictured left in Sisto-Palkino, or peasant farmers (11%) leaving the rest (49%) of production to the large agricultural enterprises. But when you dig down into the earthy data from the Russian Statistics Service you discover some impressive details. Again in 2011, dacha gardens produced over 80% of the countries fruit and berries, over 66% of the vegetables, almost 80% of the potatoes and nearly 50% of the nations milk, much of it consumed raw.

While many European governments make living on a small-holding very difficult, in Russia the opposite is the case. In the UK one councillor‘s opinion regarding living on the land was, “Nobody would subject themselves to that way of life. You might as well be in prison“; tell that to a nation of gardeners living off the land.

During the communist period school children were obliged to visit their local farms to get hands-on experience harvesting food (below left) at a time when about 90% of the nation’s food came from dacha gardens. During the same period every child would be expected to play their part in growing the family’s food from their small patch of Russia.

While the percentage of food grown by Russia’s dacha has fallen since then it is still a massive contribution to the nation’s food and forms an important part of their rural heritage. Take a walk through the street’s of Russia’s cities, like St. Petersburg, and you will find people selling herbs, fruit, berries and vegetables from their dacha gardens. Unlike many cities in Europe and the USA, Russian cities are peppered with small corner shops (below right) selling locally grown food in all shapes, colours and sizes still carrying their native Russian soil.

If you were to visit a typical Russian dacha you’re likely to be greeted with a welcoming dish called okroshka (below centre), a refreshing cold soup made from home grown cucumber, radish, spring onion, fresh dill and parsley all swimming in kvas (a home made rye bread drink) with sour cream or kefir.

Food sovereignty puts the people who produce, distribute and eat food at the centre of decisions about food production and policy rather than corporations and market institutions that have come to dominate the global food system. In Havana, Cuba 90% of the city’s fresh produce comes from local urban farms and gardens.

In 2003, the Russian government signed the Private Garden Plot Act into law, entitling citizens to private plots of land for free. These plots range from 0.89 hectares to 2.75 hectares. Industrial agricultural practices tend to be extremely resource intensive and can damage the environment. 70% of global water use goes to farming, and soil is eroded 10 to 40 times faster.