Arun Gandhi, grandson of Mahatma Gandhi and director of the M. K. Gandhi Institute for Non-violence in Memphis, TN, a non-government institute that teaches the philosophy of non-violence, tells this story of a formative lesson he learned while living in India with his grandfather… 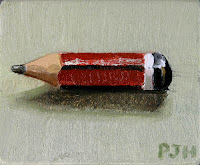 The Little Pencil Story
We have to remember, when we talk about violence, it’s not just the physical violence that we see around us. There is much more to it than just physical violence. And grandfather made me aware of this one day when I was coming back from school and I had this little notebook, writing pad and a pencil. And I was about 13 years old at the time, quite an irresponsible 13 year old. Walking home absentmindedly I looked at the pencil. It was about 3 inches long, and I said I deserve a better pencil. This is too small for me to use. And I was so confident that grandfather would give me a new pencil that without a second thought, I threw that pencil away.
And that evening when I went and asked grandfather for a new pencil, instead of giving me one he subjected me to a lot of questions. He wanted to know what happened to the pencil I had in the morning, how did it become small, where did I throw it away, and on and on and on. And I couldn’t understand why he was making such a fuss over a little pencil until he told me to go out and look for it. And I said, “You must be joking! You don’t expect me to go out and look for a pencil in the dark?” He said, “Oh yes I do, and here’s a flashlight.” And he sent me out with the flashlight to look for this pencil and I must have spent two or three hours searching for it.
And when I finally found it and brought it to him he said, “Now I want you to sit here and learn two very important lessons… The first lesson is that even in the making of a simple thing like a pencil we use a lot of the world’s natural resources and when we throw them away we are throwing away the world’s natural resources and that is violence against nature. Lesson number two is that because in an affluent country we can afford to buy all these things in bulk, we over-consume the resources of the world. And because we over-consume them, we are depriving people elsewhere of these resources and they have to live in poverty. And that is violence against humanity.”
And that was the first time I realized all of these little things that we do every day. I mean just think about it… how many useful things we throw away every day because we have such a lot of it. How much food we throw away every day. How many good clothes we throw away because we have new ones. All of this, every time we throw away something and waste something, is violence.
I originally found this story in January 2007 on the web site of the Spiral Diner & Bakery, an all vegan, mostly organic, environmentally-friendly restaurant in Ft. Worth, TX. It made me think of a Yankee maxim that my New England grandparents and father often quoted…
Use it up,
Wear it out,
Make it do,
Do without.
I think Mahatma Gandhi would have agreed. 🙂
.