Peak Everything: Waking Up to the Century of Declines 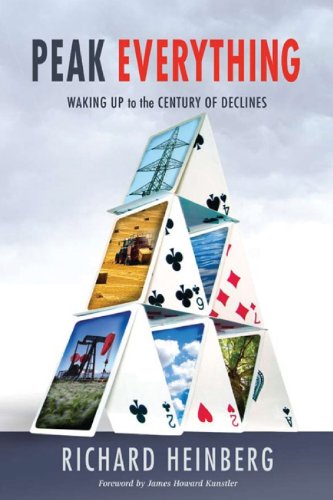 The twentieth century saw unprecedented growth in population, energy consumption, and food production. As the population shifted from rural to urban, human impacts on the environment increased dramatically.

The twenty-first century ushered in an era of declines, including:

To adapt to this profoundly different world, we must begin now to make radical changes to our attitudes, behaviors, and expectations.

Featuring a new author preface and discussion guide, Peak Everything addresses many of the cultural, psychological, and practical changes we will have to make as nature dictates our new limits. This landmark book from Richard Heinberg, author of three of the most important books on Peak Oil, touches on the vital aspects of the human condition at this unique moment in time.

A combination of wry commentary and sober forecasting on subjects as diverse as farming and industrial design, this book describes how to make the transition from The Age of Excess to the Era of Modesty with grace and satisfaction, while preserving the best of our collective achievements. Peak Everything is a must-read for individuals, business leaders, and policy makers serious about effecting real change.